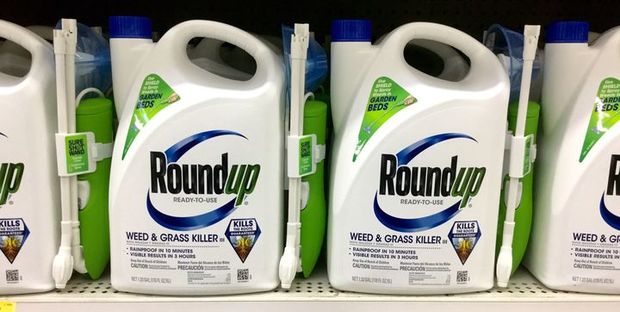 Custom warning labels on the weed killer product called 'Round up', manufactured by Monsanto is dividing the world faster than the upcoming presidential 2020 election.

In 2017 the state of California declared that the chemical glyphosate, which is the main chemical and active ingredient in the weed killer Roundup, is a toxic carcinogen.

The chemical manufacturer, Monsanto challenged the ruling in Federal court, making the state temporarily block the request for proper warning labels on the garden product.

The EPA has announced in August 2019 that they will not approve custom labels on products containing glyphosate that link the garden chemical to cancer. But California has a secret weapon, a special law to ban dangerous and harmful chemicals in their state, it is called Proposition 65.

Propositon 65 became law in 1986, approved by 63 percent of California residents, and requires California businesses to provide warnings to Californians about significant exposure to chemicals that cause cancer, birth defects, and other reproductive harm. These chemicals can be in products that consumers purchase, homes, a business, or other environments. This includes resorts and places like Disneyland.

The list of Proposition 65 cancer chemicals was started in 1987, and is currently over 900 different banned chemicals. 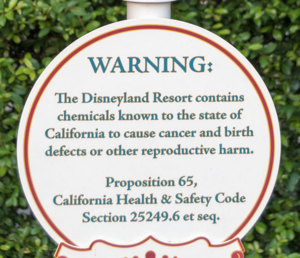 These chemicals include additives or ingredients in pesticides, common household products, food, drugs, dyes, or solvents. Listed chemicals may also be used in manufacturing and construction, or they may be byproducts of chemical processes, such as motor vehicle exhaust.These chemicals must be listed on custom labels or industrial labels in California.

Companies and organizations who fail to follow the law of Proposition 65 by failing to provide notices and warning product labels can be as high as $2,500 per violation per day.

As part of the law, most businesses selling products in California must provide “clear and reasonable warnings” before knowingly exposing people to any chemical on the list, unless the expected level of exposure would pose no significant cancer risk. This warning is often in the form of a label on the product or its packaging.

Propositon 65 has been a leading factor in a large number of consumer products being reformulated to remove toxins ingredients. The author of the law has also noted that many more consumer products and product reformulations has taken place 'invisibly' because of proposition 65's incentive to reduce toxic chemicals, and that these reformulations have benefitted consumers nationwide, not just in California.

What Does A Warning Label Mean? 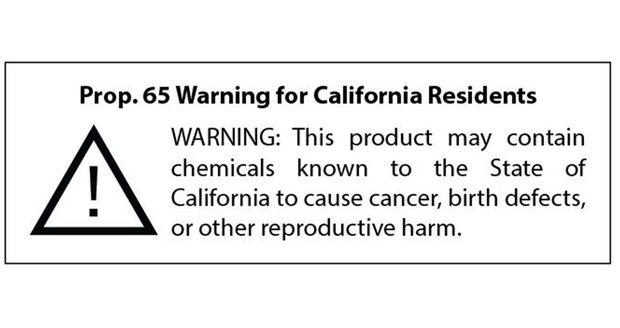 If a warning label is placed on the product or posted by the business, housing or rental, the business is issuing this warning because they believe it is exposing individuals to one or more of the chemicals on the Proposition 65 list.

By law, a warning must be given or placed on the product unless the exposure is low enough to pose no significant risk of cancer, or is below the observed level to cause birth defects.

For products manufactured after August 2018, the product warning label will usually looks like this:

“WARNING: This product can expose you to (name of chemical), which is known to the State of California to cause cancer. For more information, go to www.P65Warnings.ca.gov. “

The New EPA Study On Glyphosate

The new August 7th, 2019 EPA ruling stated that California's labels would "constitute a false and misleading statement" and that the EPA will no longer approve labels on Round up that contain the state's cancer warning.

"We will not allow California's flawed program to dictate federal policy," EPA Administrator Andrew Wheeler said in a statement.

The EPA said the move is based on its own findings that show that glyphosate does not pose a public risk when used as directed.

"Health agencies and credible non-industry experts who've reviewed this question have all found a link between glyphosate and cancer," said Jennifer Sass, a senior scientist at the Natural Resources Defense Council. "EPA should take the advice of its own science advisors—who have rejected the agency's no-cancer-risk classification."

"We think EPA's finding is not accurate and makes the rest of the risk assessment hard to interpret," says Alexis Temkin, a toxicologist for the Environmental Working Group.

This ruling comes right after a California man won $80 million in damages after finding that the popular weed killer round up, which contains glyphosate, was a substantial role in contributing to his non-Hodgkin's lymphoma.


Public outcry has complained for decades focusing on the cancer risk as well as the harm to monarch butterflies and pollinators like bees. Bees pollinate 1 in every 3 foods you eat. Without Bee's the world will have less food.

There was a finding for potential risks to mammals and birds, but said the EPA said that would be limited to the area near the pesticide. The agency is proposing spray drift management measures to reduce risk to non-target organisms.

"If we are going to feed 10 billion people by 2050, we are going to need all the tools at our disposal, which includes the use [of] glyphosate," Sonny Perdue said, who is the United States Secretary of Agriculture.

"We think EPA's finding is not accurate and makes the rest of the risk assessment hard to interpret," says Alexis Temkin, a toxicologist for the Environmental Working Group.

The EPA plans to release a decision in late 2019 with enforceable restrictions for the use of glyphosate.